Croozer Blog: Behind the Scenes

It’s a wrap! Leonie goes behind the scenes at our Cargo campaign shoot

Lights, camera, action: After our large-scale promotional campaign for the new Croozer Dog, it was time to produce the photos and videos needed for the launch of our Cargo in Lava red. This time, our trainee Leonie was given the chance to be involved. In this blog, she shares her experience from two sweltering-hot summer days! 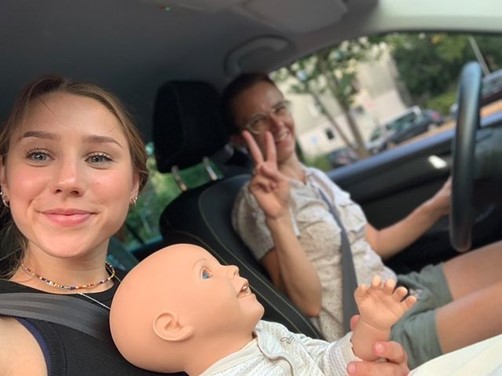 Since joining the marketing team as an apprentice, I have been harbouring a desire to experience first-hand how our Croozer photos and films are produced. I have always been fascinated by how sophisticated everything looks and how many people are involved in the process. This is why I decided to ask my colleague Caro if I could be her “right-hand woman” for one of these happenings.

A few weeks later, it was time to start work on the campaign shooting for our amazing new Cargo in fiery Lava red. Owing to the fact that – as I can now definitely confirm – the crew can always use all the help they can get, Caro took me up on my offer and asked me to be her assistant. I was thrilled and, admittedly, a bit nervous during the preparations at our offices in Hürth. What I learned before the shooting and during the preparation period is that you have to be a true organisational whiz. There are so many things to think about: everything from location scouting and filming permits to road closures, the reservation of parking spaces, food and accommodation for the participants, the selection of models and stylists and the tiniest screws needed for replacing set-equipment parts. 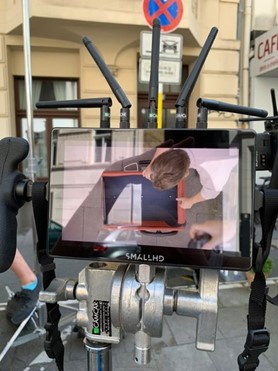 The Croozer film set – almost like Hollywood
Day 1 – it’s hot. The humid morning air envelopes us as we load the last pieces of equipment into the large Sprinter van on our campus. Packed inside are the metal structures used for holding the camera, along with polystyrene panels, reflectors, crates, tripods, displays, bicycles for the models, our Cargo trailer and so much more. I pack up my own little car with enough food and beverages for about 15 people. By the time, I’ve loaded everything, the only free space is the passenger seat. Which is good, because I will be needing it for another important job: collecting the model from the hotel and driving him to the location! David, who’s from France, speaks German with a heavenly French accent. On the way, I grill him a bit about his profession. After he tells me about all the brands he’s modelled for, I start to think: Yes, there is a real-live celebrity sitting there beside me in my little red car.

By the time we arrive at the set, everyone else is already there: the set designer, stylist, videographer, her assistant, a gaffer, the photographer, his two assistants, the drone pilot, the drone cameraman, the creative director, the art director and Caro as the shoot coordinator. Later, we are joined by our child model, Emilia, who of course can’t miss her morning classes at school. No time is wasted getting everything set up. A very high framework is used for mounting the camera to film from a bird’s eye view. During the production of the first video sequence and photos, it was once again clear to me how much work goes into shooting even the shortest shots. It all comes down to millimetre precision, well-honed instincts and lots of patience. In this respect, it’s no wonder that two full days of shooting with more than 15 professionals are required to produce a 30-second video. Not to mention the months that go into the preparation and post-production of the film and images. 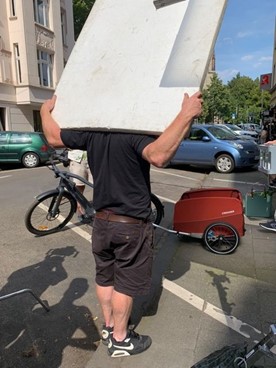 In the narrow street where we’re shooting, it doesn’t take long for us to start attracting the attention of the local residents. Now and then someone leans out of a window and asks us what we’re doing. Others pass us on the street, like a somewhat older woman from Cologne, who stops her bike and asks us what the circus is all about. When we introduce Croozer and explain the “circus”, she nods assertively and, in a thick Cologne accent, says: “Finally, someone’s advertising for something useful. Then the best of luck to you!”

In the afternoon, our child model arrives and goes straight to the stylist to prepare for the shooting. The models’ clothing is handled as carefully as raw eggs. Individual pieces of clothing constantly require ironing and must be hung under an enclosure a safe distance from the action. After all, everything has to look perfect on film! The shooting has to be interrupted now and then because of the heat. David starts to joke around, sitting in a director’s chair with his legs crossed, like a Hollywood star with a bit too much attitude, and holding a mini-fan in front of himself with his little finger sticking into the air while the rest of us are standing in the blazing sun. I guess it’s true that the people behind the camera “only” have to function, not look good. Of course, there are also plenty of breaks and refreshments for the crew.

Who are Kalle, Pakko and Tuure?

Get to know our new Croozer Cargo! 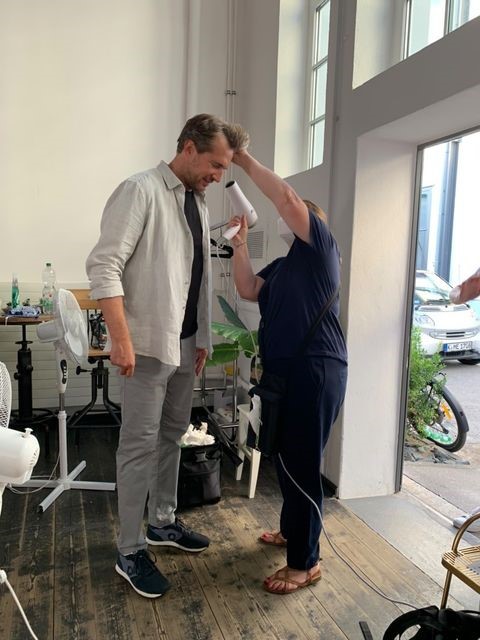 Our second location of the day is a photo studio on our campus in Hürth. I get pizza for the hungry crew so that everyone has enough energy for starting round two. Before the shooting begins, the set designers have already spent a lot of time preparing everything while the cameras and lighting equipment were being finely adjusted to the millimetre. The scene shows a father and daughter at home in their kitchen, preparing for an outing with the trailer. Caro lets me take an active role in the coordination work so that I can experience and learn from the various tasks. At one point, I’m even standing behind the director’s monitor and coordinating everything. I feel a bit like a director on the set of a Hollywood film. The work day doesn’t end until 8 p.m. (although the child model has left earlier). By then, everyone is exhausted and doesn’t have much time to get rested up for the next day.

You want to know who's behind Croozer?

Get to know the Croozer crew! 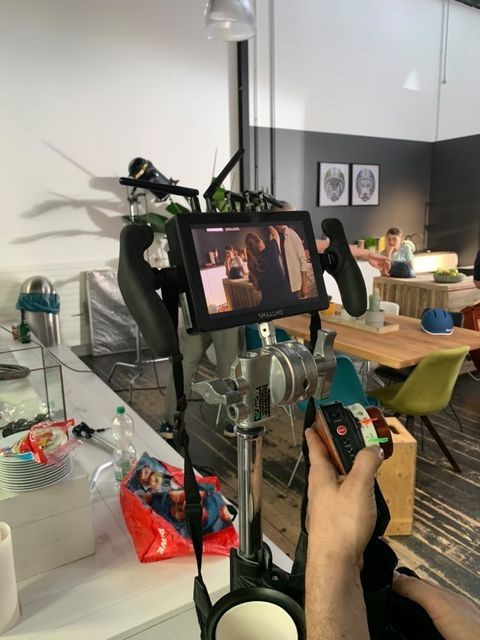 “36 degrees and getting warming”

Day 2 – and it’s even hotter. This time, I ride to the location by bike. I will have to stay mobile with our Croozer trailer throughout the day so that I can fetch water now and then. The first location of the day is August-Sander Park, where a few pictures of our Croozer are taken by itself, with no models. This gives me some more time to chat with David and his stylist. She has also been on the sets of some really interesting and well-known films. So exciting! Then almost everyone rides to the next location by bike – except for the camera team, who take the van. We’re heading back to the Ewaldistraße, where we were on the previous day. This is where the first drone footage is shot. It’s interesting how many legal requirements have to be met: For example, no footage can be taken through windows, not even accidentally. When the child model, Emilia, arrives from school, we are still working on a few scenes in the park. And this is where I suddenly become a model! OK, not really a model, but you can see me in the images, as an extra, very small and in the background – but you can see me!
Emilia is totally bright, and you can tell that modelling is her thing – sometimes we have to practically beg her to take a break.

We also take the bikes to the last location. On the way, I stop at a local kebab shop, because everyone is hungry. We film the last scenes in front of a corner store in Nippes. At the end of the shoot, everyone applauds: “It’s a wrap!”
Exhausted, but totally relieved that everything went smoothly, Caro and I ride home after cleaning up. We look back on the two days, and I share my first impressions as a newbie. Then it’s a long wait for the final results, which you can now admire on our attractive and informative Cargo Experience Page!

Hanna on her work for the ADFC

Our managing director Hanna Grau joined the federal board of the German National Cyclists’ Association (ADFC) at the end of 2021. Learn more about her work. Read more

We are the Culture

Our company values are important to us – which is why they are prominently displayed on a wooden panel that hangs on the wall as a daily reminder. In this post, we tell you about these values and explain how we came up with them together! Read more

Hannas daily life as a Mompreneur

Our managing director Hanna is co-author of the recently published book: Gründen - Frauen schaffen Zukunft. In her interview with us, she offers insights into the various issues and takes us with her on a day in the life of a “mompreneur”. Read more 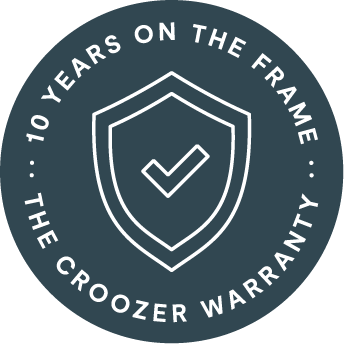 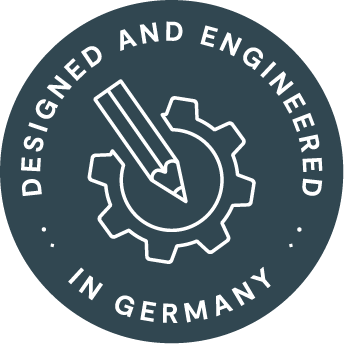 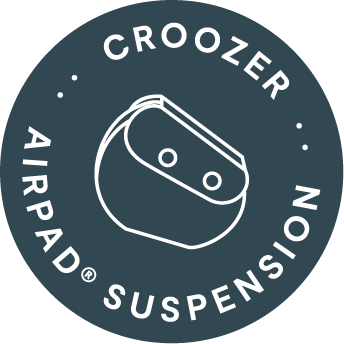 Stay informed about our new products and special offers